Now that December is here, quick knits are our go-to for knitted gifts. This week Kelley knit up the free pattern, Calisson Headband by the Berroco Design Team. She made several modifications to make the headband seamless and easier to knit! This headband knits up in an evening and uses up scrap yarn – win-win!

Kelley made a few modifications to the pattern to use bulky yarn and make a slightly thinner and seamless headband. By using a provisional cast-on, you're able to join both ends of the headband with a kitchener stitch to make a seamless join.

Here is an example of how to do a provisional cast-on: After finishing the headband, join the provisional cast-on and end with the kitchener stitch. Watch the video below for how to do this neat seamless trick!

Kelley wet blocked her first headband and discovered that the headband lost some of its structure. With her second headband, she just misted the headband with water and tugged things into place. For the best fit she recommends just lightly misting or wetting the headbands instead of soaking, and spot clean as-needed instead of washing. 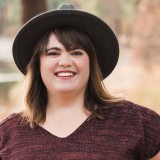